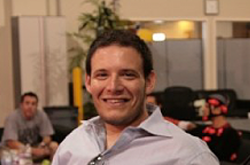 THE STARTER SCREENPLAY: An Interview with Adam Levenberg 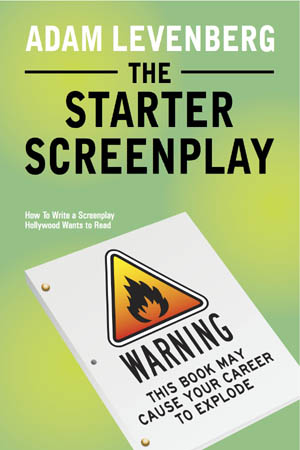 What is a "Starter Screenplay" and why is it important for new and un-produced writers to be aware of the concept; hence your book?

Young screenwriters often are bursting with artistic inspiration and aspire to write great films. They need to be learning how to write great commercial movies. Let’s say you love Alexander Payne movies like THE DESCENDANTS or NEBRASKA. Payne is also a credited writer on JURASSIC PARK 3 and the Adam Sandler movie I NOW PRONOUNCE YOU CHUCK AND LARRY. I’m sure both of those projects changed after his involvement but the point is that the ability to deliver a great indie movie is predicated on the ability to write something commercial. The tools are all the same. So you might as well write something an agent will want to sell.

In other words, learn the necessary elements of screenwriting and genre, settle on a commercial concept (a script that a studio would make) and then think about how you can subvert the traditional to do something interesting. But you can’t ignore the rules of genre or structure, claim “inspiration” and end up with a screenplay that works. It won’t.

In your chapter on "Concept" you came up with "10 Guidelines" which I thought were good, if you had to narrow it down to just one... which would you keep and why?

I think the most important rule is “One Hero Only.” Know who your hero is. Show the story through their eyes. Give them a clear goal, a ticking clock, facing prison, death, or ruin of family/career if they fail. Make sure all of the events happen over a day, a few days, or maybe a week. No hopping and skipping through the months and years unless you’re talking about a prologue or epilogue sequence.

You mentioned that structure is not the place to express creativity, how do writers go wrong with structure?

They go wrong because they haven’t learned it. Many say they’ve read Blake Snyder’s book, I ask what happens on page 75 and they say “I don’t know.” They read the book like a magazine, they didn’t LEARN it...And while I love Snyder’s structure I think it’s foundational information. In other words, a writer needs to know that and a whole lot more to deliver a great script.

Also, I run into a lot of writers who learn from ancient books or old instructors (who use ancient books.) If you learned structure from Syd Field, start over. The info is useless, perhaps damaging. If you think the first act ends on Page 30, time to start over because cinema is rapidly changing. It’s not just that Act I ends on page 25 now.  The first act has been completely reconceptualized over the past twenty years. Movies work differently than they used to and that’s a good thing, first acts move faster and cover more territory than they used to. This is just one example where the old sources of educational information can mess a writer up.

When you're working with a new writer, what is that process like? You read the script, but what else?

I mark up the PDF so I can address errors in the approach to writing. I draw lines through extraneous dialogue and sections of  scenes.  I’ll also circle things to show writers how often they repeat themselves or specific mistakes. And I write questions and thoughts in the margins to provide a running commentary. But that’s just the start.

After I finish the script, I write up a set of notes or discussion points, depending on how advanced the material is. Then I email the notated PDF and the notes to the writer on the day of our phone consultation. That’s where the real work happens and where the most advancement occurs because the writer can explain what they were trying to do and I can help them more directly. The phone consultation has no time limit--if we need to talk for five hours, that’s ok. But usually it runs about two hours.

I'm always told writers should be readers and I can't agree more. You bring this up in the "tone and mechanics" of screenwriting. What type, genre, ect. of material should writers be engaged with?

If you want to be a screenwriter, read about 200 screenplays. And I suggest some very specific limitations towards your tally. The scripts have to have sold to a studio within the last 15 years AND be unproduced. Go nuts reading all the scripts you want but you’re not learning by reading THE GOONIES or STAR WARS, you’re just recollecting the movie based on the screenplay. It’s a totally different brain exercise to imagine a movie that doesn’t exist yet. Writers can get scripts online today, you can find batch files of unproduced Hollywood scripts out there quite easily. Take advantage of that.

Accepting the premise that all aspects of a screenplay are important, which ONE is the most important and why?

As far as I know, nobody has ever written about genre like this before. Writers are on their own to do what I call “identifying your family of movies” before writing a script. In other words, find movies that function like the concept you want to write and study the hell out of them.

There’s not enough information here for me to answer.

I offer a concept consultation. For $99, I allow writers to hire me and we discuss (for about an hour) all of the concepts they’ve been working on or brainstorming. Many think they’re hiring me to say “yes” or “no” but it usually is about me asking great questions that they’ll have to think about before they write. Or I’ll say “before you write that, you need to see these three movies….” Or “Why is that character the hero, wouldn’t it work better if the hero was X?”

Again, it’s not about “good” or “bad” ideas. It’s about which idea is worth your time? Which idea do we get stuck on, which idea sparks a solid brainstorming session where we come up with great ideas that you are excited about using?

What three things would you say are essential to writing an effective scene?

What are the biggest mistakes (not already discussed) writers make and how can they fix those mistakes?

In general, writers can’t fix their own mistakes. Someone has to help them. If your best friend or your aunt is a working screenwriter, they can provide the feedback you need. Other than that, you need to get the feedback from someone who knows what they’re doing.

Every writer who hires me has learned that dialogue should be as minimal as possible. They know that. They understand that. But are they exercising that to the fullest extent? With clients, I always go through a few scenes and cross out extraneous dialogue and action to show them what their material looks like with all the fluff removed. The scene remains 100% written by the writer but now works much better, moves faster, and isn’t missing anything of substance. Once they see how that works, they can appropriately condense the rest of the script. But most importantly, it will change their process for everything they write in the future.

This is one area where writers always show drastic improvement when they return for a new script or rewrite consultation.

What separates you from other "script consultants"?

I talk to writers. Most services outsource their feedback, take 50% or more of the fee to send the material to an outside reader who writes notes, which get emailed to the writer.

I often talk to writers before they hire me to answer their questions. And I talk to them after I’ve read the script. And sometimes I talk to them after, they’re allowed to call me with questions in the future, whether it be about writing or the situations they encounter as they attempt to navigate the industry.

You have a podcast called “Official Screenwriting”. How is the information there different than your book?

THE STARTER SCREENPLAY is a summary of information I felt new screenwriters needed but that wasn’t offered in other books. It is rigorously condensed (I even use bullet points at times) so that writers get the necessary information. One of my criticisms of other books is that they might have great insights but there’s no delineation between “you MUST learn this” and “here’s 100 pages of things that you might want to think about”.

Official Screenwriting (which anyone can subscribe to for free on iTunes) started as a far less structured medium. The first 32 episodes were unedited and were just me rambling into a microphone talking about specific movies and identifying tools that writers can use in their own scripts. Often I formulate and talk out new ideas while recording, whereas my book is the finished product of a similar process.

I just learned how to edit, so the podcast is going to be more linear from now on, but the show is always going to be a rough draft. More than anything, I hope it teaches some writers how to think about screenwriting.