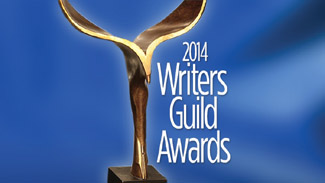 I hate, hate, hate the way the WGA announces its winners. Like last year they presented their awards concurrently during ceremonies on both coasts, but yet only live stream (thanks to LA Times) the west coast awards. This way everyone on the east coast got to tweet the winners of the big awards like Best Original and Best Adapted while the rest of us were riveted by Best Soap Opera or whatever the hell they call it. It's just stupid. Have one damn show, one damn location, and one show you live stream. If its a territorial thing then host it in Chicago!

The WGAw show was live streamed and as usual, was pretty well done. LA host Brad Garrett was funny enough, he opened with “I think I was starting off on the wrong foot when I went over to the writer of GRAVITY and ask him to valet my car. I had a feeling that it was written by Mexicans when the spaceship wouldn’t start.”  Had me rolling on the floor, but the schmucks in LA were appalled I suspected as barely anyone laughed.

Anyway, as for the honorees and awards, here's my thoughts on the ones (few) I cared about:

As expected TV Drama categories were dominated by BREAKING BAD (Written by Sam Catlin, Vince Gilligan, Peter Gould, Gennifer Hutchison, George Mastras, Thomas Schnauz, Moira Walley-Beckett; AMC) as it should have been. BB is the best drama I've ever seen. The best writing, edgy, dark and dynamic. It was total domination, I mean the show had three of the six nominees in the category for episodic drama.

The Paddy Chayefsky Laurel Award for Television Writing Achievement went to Garry Marshall. The man is a legend. His credits go on for hours.  The guy is funny as shit and listening to Henry Winkler talk about Marshall you got a sense of the man as being larger than life.

The award winners for best original and adapted screenplays are not who I wanted to win. The winners were, HER (Written by Spike Jonze; Warner Bros.) for Best Original Screenplay; and for Best Adapted Screenplay...

... CAPTAIN PHILLIPS (Screenplay by Billy Ray; Based on the book A Captain’s Duty: Somali Pirates, Navy SEALS, And Dangerous Days At Sea by Richard Phillips with Stephan Talty; Columbia Pictures).

Hard to swallow frankly. I don't have a big problem with HER winning, it is masterful writing and the premise had to be hard to pull off. Think about the narrative and how tricky it would be to write that from scratch. Takes a masterful scribe. However, my pick if I had one, DALLAS BUYERS CLUB (Written by Craig Borten & Melisa Wallack; Focus Features).

But as for CAPTAIN PHILLIPS (see my review here), it's not the script that made it a popular movie. It's Tom Hanks.  It's the character of Captain Phillips; he was an incredibly brave guy and a true hero. I could have written that script. I know a lot of writers who could have.  My pick if I had one: THE WOLF OF WALL STREET (Screenplay by Terence Winter; Based on the book by Jordan Belfort; Paramount Pictures). The Wolf script is also tricky as you're dealing with a protagonist who is not incredibly sympathetic.

I am a professional screenwriter with some years of experience, but I'm gonna say some shit on here that might piss some people off so I am the Mystery Screenwriter.