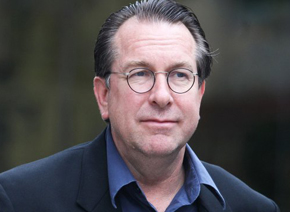 (This interview represents the renewal of SU's TEN QUESTIONS interview series. You can search our archives for more interviews.)

I have to admit when I asked Steven Gaydos (IMDB) to participate in an interview I had no idea that the guy was a pretty big deal. I knew he was a journalist and screenwriter, but truly didn’t understand the dynamic background of the man.

Gaydos isn’t just a screenwriter, he’s a writer. Few can say they are as complete and accomplished as a writer. Some screenwriters dabble in other forms of fiction, but few cross over into other mediums as well. Gaydos was recently promoted to Executive Editor at Variety, he's been a songwriter in Nashville, a published author, and when he was younger a poet. “I have always been writing,” noted the screenwriter of the cult classic movie ROAD TO NOWHERE (2011).

He is a member of the WGA, the British Academy of Film and Television Arts, and the European Film Academy. He is author and/or co-author of “The Variety Guide to Film Festivals,” “Movie Talk from the Frontlines,” and “Cannes: 50 Years of Sun, Sex and Celluloid.” Gaydos is widely regarded as an entertainment expert and last year served as a select juror of the CineMasters section of the 31st Munich film festival. (Source: Variety)

Finally, Gaydos has some important words of advice to offer in the following interview and for me none more important as this: “Be about something.” As screenwriters we too often get caught up in the desire to Make it Big! When in reality a true writer, indeed, is about something. This speaks to the themes we write about and the voice we carry into our writing.

So, needless to say it is an honor to present TEN QUESTIONS WITH STEVEN GAYDOS:

1. CW: Steven how did you first get into screenwriting –you're a journalist by trade? SG: The short answer is that I have been a writer my whole life, meaning since I was about five years old. When I was twenty I knew I wanted to write pop music and movies. So I started doing a little of both, attending the California Institute of the Arts to study screenwriting and I had my own rock and roll band and was writing songs. I'm still doing both!

2. How has your background as a journalist helped (or informed) you as a writer? I have learned that without a deadline and a paycheck, nothing gets done! I've also learned about the filmmaking business and that helped me as a producer on ROAD TO NOWHERE. Of course, my immersion in Hollywood probably made it impossible for me to NOT write a movie about filmmaking.

3. Professional screenwriting is a journey; your path spawns several decades. What can aspiring screenwriters learn from your journey? Be about something, be for something, need from the marrow of your bones to express something hopefully worth hearing. Draw from what you know and what you love. Take your personal journey and find a universal story that will resonate for a big portion of the moviegoing public.

4. Your latest produced credit ROAD TO NOWHERE was fairly well received (FilmThreat called it a "cult classic") and you reunited with director Monte Hellman. How did that all come together from script to screen? I had a dream (literally) which led to an idea for a movie which led to a script which led to Monte and I collaborating on the film. Monte had wanted to make a film from Alain Robbe-Grillet's LA MAISON DE RENDEZ-VOUZ, which is structurally very similar to ROAD. We also collaborated on a screenplay for an unrealized project called THE MIERNIK DOSSIER from the novel by Charles McCarry. Again, this was a non-linear story. And we also tried to make a movie out of Jorge Semprun's novel THE SECOND DEATH OF RAMON MERCADER. Remember, these projects took place across several decades. So almost forty years and three attempts later, we made ROAD TO NOWHERE.

5. Are there any "teachable moments" you experienced along the way as a screenwriter that stand out?  I think forcing yourself to quickly write a first draft no matter how bad it is must rank as number one. Also, watch THE APARTMENT and learn what GREAT writing is all about. Then you've got it! Cinema right now is being destroyed by TV habits. Worst of all is the effect of the procedural. It's a perfect formula for selling toothpaste but it's absolutely NON DRAMATIC. Don't do that. Please. Find a story with dramatic conflict and tell that. We need more stories that are dramatically sound and less bullshit.

6.  What is your process when you write? How do you approach a story? I like what Preston Sturges once said, which was he never wrote a "story." He always created characters and situations and after he had a bunch of both he found his story. I've also worked out every detail of a script from beginning to end before starting, so I think both methods work. Here's a good trick that is credited to Paddy Chayefsky: "Who is your hero? What do they want? What is stopping them?" Analyze movies by asking those questions and find out how your story works when you ask those questions.

7. What was the toughest scene you ever had to write and how did you overcome the obstacle(s)?  In ROAD TO NOWHERE, we needed to make sure that Mitch and Laurel were really in love. Monte really helped me with the scene where they're watching a movie together and you can see they have developed a serious bond. Creating love: there are no tricks! The audience feels and believes the characters are in love or, to quote ROAD TO NOWHERE "Or not!"

8. For writers it's a personal journey when a story is finished and for screenwriters that journey comes to life on screen. As a journalist and screenwriter, how does that journey impact you? Thanks to Monte Hellman and ROAD TO NOWHERE, I now have a movie that expresses everything I ever wanted to say about life, love and movies, especially crime films and European dramas. Who could ask for more?

9. How has screenwriting (the craft) and cinema changed since 1988 and your first movie? Screenwriting seems like a lost art. I pretty much despise the majority of the American films I see and perhaps as high a percentage of the non-American films. I trace most of the problems back to screenplays, which is usually the fault of producers who either don't know what makes a good screenplay or are determined to make money off dreck that is based upon stupid or boring screenplays.

10. What are you working on? My two new screen projects are BRING ME THE HEAD OF SAM PECKINPAH, an original comedy about filmmakers in the 70s. My other project is a screen version of Herbert Gold's brilliant Beat Generation novel, "THE MAN WHO WAS NOT WITH IT." And I have a new album of Americana/Alt Country songs, RAIN IN THE DROUGHT by Sun and Moon. I'm co-writer of all the songs on that album.