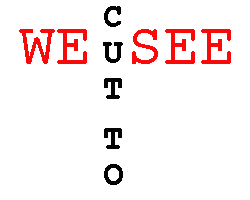 Cut To We See Screenwriting

It is often discussed in screenwriting classes, seminars and even occasioanlly here on Twitter that your screenplay absolutely should not contain “WE SEE” in your action description or exposition. This would result in the reader throwing your script into the recycle pile... I mean hitting the delete button.*

It makes perfect sense!  It screams, “I am an amateur!”  But really, it doesn’t, and it’s just one more thing to distract you from writing a good story. Professional writers use WE SEE all the time… yes I know they are professionals and produced; they can get away with it.  Yes and no.

Think about how we as screenwriters use WE HEAR... along with WE SEE.  Now your head might explode.  It's visual and it absolutely brings our attention to it.  Sometimes making sounds in ALL CAPS gets old, isn't "WE HEAR the sound of gunshots" better instead of ... "BLAM BLAM BLAM" or "BANG BANG BANG" or "POW POW POW"... okay just making a point.

I am here to tell you that what kills your script with the reader is not the use of WE SEE or CUT TO it is BAD screenwriting.  Poor writing causes every word to scream at the reader and then they can nitpick everything about your script they hated... including your use of WE SEE and CUT TO until it drives them to stop reading.  As a friend of mine (an executive) confirmed to me when asked for this article, a bad script makes every little detail jump out.  A good script and the occasional use of a WEE SEE or CUT TO and it doesn’t matter.

Sure you need to watch your usage (CUT TO would be the one to really watch, not sure why you would need it much) and do not over do it, especially with the young kids today who just love the hell out of SMASH CUT.

Here is an example for how a professional writer that I have a lot of respect for used the “we see” analytic:

William Goldman and his script for THE SEA KINGS (dated August, 1995 draft), page one:

And how about my friend Scott Frank, he uses WE SEE all the time here's an example from GET SHORTY:

My God the so-called rules these men break, and Goldman not just on the first page but in the first freaking paragraph!  Search the Internet for professional and produced screenplays and you'll see plenty usage of WE SEE, CUT TO, WE HEAR...blah blah.

Just write a damn fine story that follows the 3-Act structure and has well drawn characters and you are going to be just fine.