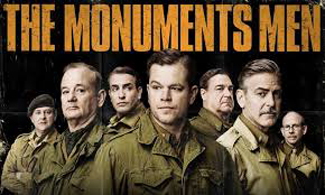 Back in 1964 a pretty good WW2 film called THE TRAIN directed by John Frankenheimer with a screen adaptation by Franklin Coen and Frank Davis (based on the non-fiction book Le front de l'art by Rose Valland) came out with a somewhat similar premise as THE MONUMENTS MEN, but different in focus which was key.

The focus of THE TRAIN was specifically the French Resistance and Allied attempt to stop the Germans from moving stolen art masterpieces by train to Germany. The premise and the entire story is tightly focused on this one thing, “the Train” and therefore was able to create suspense and tension. Here's a scene from THE TRAIN that you just don't find in THE MONUMENTS MEN:

This unfortunately is not the case with George Clooney’s THE MONUMENTS MEN; which Clooney produced and directed, and co-wrote with Grant Heslov (nominated with Clooney for an Academy Award for Best Original Screenplay for GOOD NIGHT, AND GOOD LUCK, as well as THE IDES OF MARCH.)

I think one of the issues is that Heslov and Clooney are actors at their core and their screenwriting reflects this. Their writing has been sensational like with GOOD NIGHT, AND GOOD LUCK, but here it falls flat narratively. Great actor’s want material they can sink their teeth into and THE MONUMENTS MEN has those roles and scenes that actors love. It’s just the story (the screenplay) that is lacking; and that's a surprise as once again, Heslov and Clooney have proven themselves as writers.

Perhaps the problem lies with the source material, The Monuments Men: Allied Heroes, Nazi Thieves, and the Greatest Treasure Hunt in History, by Robert M. Edsel.  An outstanding and comprehensive study of Nazi art theft, but that itself is problematic to begin with due to the book's scope and depth of subject matter. Simply too much to take on with this adaptation.

Where THE TRAIN has an effective narrative device, one centered on a race against time that drives that story home effectively. THE MONUMENTS MEN takes on too much and unfortunately its narrative teeth are too dull. The script can’t decide if it wants to be that race against time art caper, the thriller, the buddy action/adventure, and in the end it’s a jumbled mess of a story with good intentions at its core.

The storyline in case you haven’t heard: a team of aging art aficionados and experts become over the hill soldiers and take off across Europe during the Allied invasion in search of Nazi stolen art. You get the sense that there is too much going on and that cohesion will be a serious issue.

But it's not just the size and scope of the story. The narrative never builds, it never reaches a point of tension where I felt the stakes were high and the outcome in doubt. Even the ending, where there is an attempt at tension, it comes off flat. I was excited about the premise, for me the historical story behind the screenplay was a point of interest. As a history buff I love historical based stories. So with that bias I can’t say that the movie totally failed. I am a George Clooney fan and the subject matter was entertaining enough, though I would not go out of my way to see it again or purchase it.

Here's a series of video clips that I think provide an example of the movie's success and yet failure. Within these scenes you can get a sense of a story that is in conflict with itself on what it really wants to be: