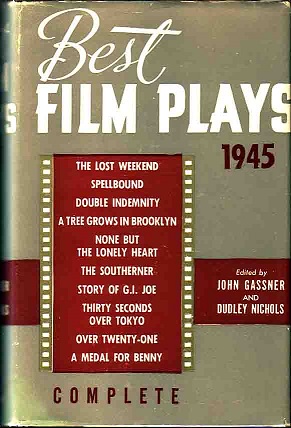 The Machine from the God

"[producers] must produce a constant and standard product; for the... machine must be fed at a steady rate as a real estate investment. They work zealously at this all along the line. They buy a backlog of stories already fabricated, stories that have been tested by millions..."

"Every move of an actor must be emblazoned. Fan magazines are encouraged. Finally millions of people will crowd the box office if only those magic names are put up on the marquees, without regard for what sort of film it is."

Sounds like a description of today's Hollywood doesn't it? The above quotes are from Dudley Nichols, an Oscar winning screenwriter for THE INFORMER (1936).  Nichols served as president of the Screen Writers Guild in 1937 and 1938. In 1954, he won the Laurel Award for Screenwriting Achievement from the Writers Guild of America.

In 1946 Crown Publishers (New York) published the Second Annual Best Film Plays, edited by John Gassner and Dudley Nichols. The publication series represents the first attempt at publishing and really celebrating Hollywood screenwriting that I have found. It's also noteworthy that the series would not make it to a third publication.

In it Nichols wrote an editorial titled "The Machine From the God." The piece is interesting as in it Nichols tackled not just the studio system  (the "machine"), but also he took to task the audience and what he saw as a "cultural and moral regression." The machine was just doing what the machine does, "give the people what they want." Something you still hear today.

Anyway, an interesting article that I will be writing more about including Crown Publishers attempt to celebrate the Hollywood Screenwriter and why it failed.