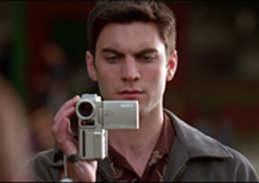 It's throw back time to 1999 and Best Original Screenplay winner AMERICAN BEAUTY. This is one of the Top 100 Screenplays of all time in my opinion. Alan Ball (IMDB) was primarily a TV writer before his Oscar win and he continues to work mainly in the coaxial arena as a producer and writer. Characterization is the key to any drama and great character writers like Ball make these screenplays sing. This is one of those rare beauty's that brings forth an opera of joy.

The movie opens differently than the original early draft of the script which shows Jane’s boyfriend in jail -- after the murder of Lester presumably.   The final shooting script (hence the movie) is more effective because it avoids a lot of the convolution of the original (draft) script’s opening.  Let’s pick up the script with the opening scene involving Jane and her boyfriend :

Right away the script establishes that Jane is not happy with her father. But then this mysterious, seemingly off-handed desire (request) for him to be dead and then her boyfriend apparently agreeing to do the deed. Got me hooked so far! BUT ALSO, Ball is seemingly hinging his whole story on a flawed protagonist who is apparently a borderline creeper at best! Now, let's just put that aside for a moment. In the next scene and we meet her father, Lester. Right away he tells us, yup, going to be dead in less than a year. Not only is this even more intriguing, but his introduction is, well, memorable and also continues to make us wonder if maybe this guy might deserve to die!?

“My name is Lester Bernham. I'm forty two-years old. In less than a year, I'll be dead.”  Obviously this  is going to “hook” your reader even more when considering Jane's apparent desire to see her father put out of his misery. But without a good story, without well-drawn characters, this “hook” would only be a giveaway to your audience. The only question left is, Who kills him and why? Okay two questions. It can't be Jane's boyfriend that's too easy... or maybe that's the point?! If you haven't seen the movie you'll have to in order to find out!

AMERICAN BEAUTY did not disappoint. What an excellent screenplay by  Ball. It accomplishes exactly what needs to be done in those opening pages.  He introduces the main character(s), sets the stage, presents the dramatic issues, defines Lester’s need (he feels dead already in life), and outlines the circumstances and situation of the protagonist.  (You can read the opening scenes and the script here.)

As Lester moves forward, going to work, going to see his daughter's cheer squad, parties with his wife, observing his wife, the new kid on the block... the story is moving and he’s narrating for us. I love the voiceover usage and this is a great example for how to use it.  Ball gets into and out of his scenes with great dexterity and the voiceover does not ramble on.  It’s also witty and humorous which served the action and the story well.

Lester’s life has slipped away from him. The things that were important to him at one time he has lost: his relationships, he values, and his passions. This is a character that a lot of middling men related to.  But the screenwriter didn’t stop there with interesting and well-written characters.  He first presents us two troubled teenagers (Jane and her boyfriend), though we later learn they are not so troubled; they’re good kids at their core.  He also presents Lester’s wife Carolyn who though she is not as sympathetic at times, Ball hits the nail on the head with her character.  He just absolutely nails her... numerous times! I think a lot of women could relate to certain things about her. Or maybe not...

So making that emotional connecting between your audience and your main character(s) is obviously important, but how you execute that is the key. And though you cannot give secondary characters as much script time as you do your protagonist,  you still have to be effective and make those characters "beautiful" as well and that will make your script sing!

Here's the opening scene for your viewing pleasure: