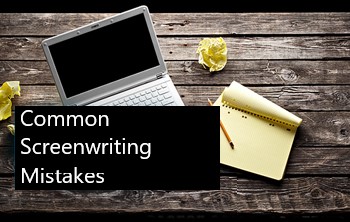 Here are some of the most common screenwriting mistakes I see, especially from younger writers.

Overrwriting.  Keep your scripts "vertical;"  meaning every page should have lots of white space on it so that when looking at your page, it's like looking at a ladder of sentences.  There's a step by step, line by line spacing because you're not writing huge paragraphs.  Why?  It reads better and when a reader opens up your script and see's that as opposed to huge chucks/paragraphs of writing they will feel better about having to read yout script. Trust me!

That also means you are not the set or costume designer.  If the color of the carpet is mentioned it better be damn important to the scene or the story.

Keep character descriptions to minimum.  We don't need to know exactly what they look like or what they are wearing unless, again, it is vital.

Meandering scenes.  Not getting into the scene late enough.  Remember we don't always have to SEE your character enter the bar, bedroom, bathroom, etc.  When you can, start the scene with tension or conflict as soon as possible.

Too much talking heads. Chit chat isn't important dialogue.  It's not moving the story forward.  That doesn't mean a character can't be coy and allude to the weather or something minor as long as there is a purpose for doing it.  Like trying to piss off someone by being so blasé.

Speaking of dialogue, too much expository dialogue. Communicating important information shouldn't always be between talking heads.  Whenver I read "Well as you know..." I know this is an amatuer writer.   Try to show us visually if you can.

Finally, stories that lack a narrative spine.  What I mean is, a story that just meanders, no dramatic drive or tension holding it up.  A lack of focus on building drama and getting us into the story is a common issue.