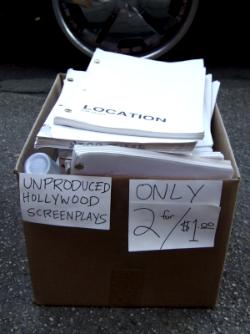 The Cruel and Shallow Money Trench

The money trench. That was Hunter S. Thompson’s take on the TV business, but the phrase has been applied with equal accuracy to the writing side of the film industry. "Where thieves and pimps run free and good men die like dogs." Like poetry really, and less hyperbolic than you might think. Because being a screenwriter who actually gets paid for what he/she does ain’t easy. Never has been, never will be. But people keep trying, every day, arriving in Hollywood with a laptop and a dream, looking like so many well meaning douche-bags as they clutter up my Starbucks for hours on end. And even though it’s futile to speak ill of the dream factory, here are the top reasons you, aspiring writer out there, should save the bus ticket, give up now and get a real job.

YOU WILL DEVELOP AN ADDICTION

I heard a story once about a documentary crew who went to a supermarket in LA and asked everyone walking out how their screenplay was coming. Nine out of ten responded with some variation of “Great” or “How did you know?” There is nothing but competition out here, and the more people there are trying to do what you do, the less likely it is that you will make find your way to any sort of employment. Trouble is, being a writer is seen as the simplest way to get into the movies. You don’t need looks your humble author being a perfect case in point you don’t need to know an F-stop from a bus stop, and you don’t need a dad who owns a studio. All you need is some screenplay formatting software and desire to humiliate yourself on the page. Want some numbers? There were roughly 600 movies released in 2011. There are roughly 12,000 members of the Writers Guild of America, who all have sold something already and are trying to do it again. You are up against some very talented, smart, funny people who already know some folks in the business. You are screwed.

YOU WILL NOT MEET WOMEN

I say this for all the male writers out there who dream of being on set and catching the eye of some young ingénue. This will not happen. Only directors get laid on film sets. There’s the old joke  -- very un PC -- about the Polish starlet who slept with the writer to get the part. There is a reason for this joke. And even if you make it, while you will be well paid, you are the first one they will fire if things go wrong for any reason. You will not be respected. You may not even be allowed on set to watch them film your script. Henry Kissinger said power is the ultimate aphrodisiac. You will have none. Adjust your expectations and libido accordingly.

YOU WILL NOT GET RICH

The median income for a Writers Guild of America writer is around 5,000 a year. The average -- yes, you’re a writer, you can figure out the difference between median and average -- is in the six-digit range, but realize there’s about 1% of guild members who are near the top who make just a shit-ton of cash. These are the writers with very long driveways. You will not be one of them.

See, and you thought you might starve. Well no one starves in Hollywood, but you will sit for hours on end, eat horribly and generally start to look like your father or mother, or perhaps the person who ate your father or mother. Wanna stay thin? Get a job that puts a premium on movement over grammar.

OTHER WRITERS WILL START TO SEEM NORMAL

Do I sound normal? See, that should be terrifying.

YOU WILL RUN OUT OF IDEAS

Yes, you’re an idea person, but your creative well is only so deep. A good sign that this has happened to you is when your hero’s occupation, before he accepts the “call to adventure,” is that of you got it: a writer. Because we all write what we know, what you will know is the tyranny of the blank page. This will be, or should be, a terrifying moment. You will also start to notice that every other idea you have has already been done, or is being done by someone who already gets paid for it. (The Internets are great for this. Want to re-crush your dream, check out Deadlinehollywood.com or one of many other sites to see how “your script” already has stars attached.) This is when you should give up and get on board with your plan B. If you do not have a plan B, please find one. Of course, if writing is simply the only thing you can do that’ll make you happy, or you’re simply not that bright, none of this will matter. You will insist on moving forward, following that “dream within a dream” (thank you Bill Goldman) that may lead to modest notoriety, inevitable divorce and the ability to charm cocktail part guests with tales of abuse at the hands of Hollywood’s elite. So if we’re gonna do this, let me start doling out some tips and advice that I wish someone would have given me when I rolled over the hills into Hollywood too many years ago to properly recall.

You won’t be getting any of that “follow your dreams” crap, but in future posts I will try to be as straight with you as possible, culling the wheat from the BS, pointing out rookie mistakes even I still make on a regular basis, and generally offering guidelines to help you realize that this isn’t the line of work for you.

Collin Friesen is a professional screenwriter, producer and director.  The above is a repost from 2014 when Collin wrote a series of articles for us.