Sofia Coppola on LOST IN TRANSLATION 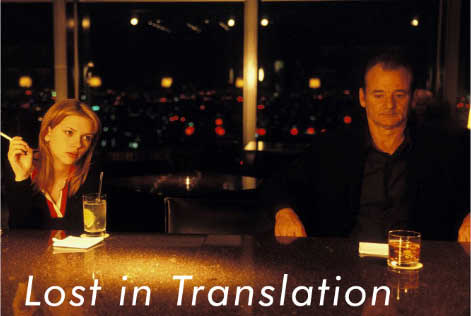 Sofia Coppola has only written two features and two shorts, but her work is already the subject of much discussion. Recently she was featured on the cover of the New York Times Magazine, which declared her “the most original and promising young female filmmaker in America.” Perhaps her family name brings instant attention to any project, but her previous film The Virgin Suicides won recognition on its own merits. The study of an enigmatic group of sisters entranced audiences despite its downer subject matter.

Coppola’s follow-up film, Lost in Translation, has a similar melancholy tone but no death. It centers on an actor (Bill Murray) in Japan film- ing a series of commercials. Bored and lonely, he befriends a young woman (Scarlett Johansson) who is also effectively alone in Japan as her husband has gone off on a pho- tography assignment. The two share their mutu- al loneliness as they explore Tokyo without ever really emerging into a mode of happiness.

The tone of her films comes from Coppola herself. She speaks slowly, taking her time with words, which is similar to how her films slowly evolve with gradual pieces of information. You wouldn’t jump to the conclusion that she is sad, but her mellow tone suggests a sense of extreme relaxation that’s either pure comfort or acquies- cence to the stresses of Hollywood life.

What  is  your  process  when  you  have  an  idea  to sit  down  and  write  it?  On this, I had spent a bunch of time in Tokyo, so I was thinking about that. And then I was just kind of taking notes about different little impressions I had of it there and started writing the script but not in script form, just more like little stories, and then kind of collecting pictures for the visuals. And then I kind of adapted that to a script.

Did  you  always  know  you’d  have  Tokyo  and could  you  have  set  it  anywhere  else  if  you  couldn’t  shoot  there?  That was really the starting point for the story that I wanted. Just when I had spent time in Tokyo, I thought, “Oh, I really want to film this, and I love the way the neon at night looks.” That was really the starting point of the story though. I never thought about setting it somewhere else.

When and why were you in Tokyo? A friend of mine was doing a fashion show and asked me to come help produce it. And I said, Okay, I'll come to Tokyo. And then I met that guy Charlie. He had a magazine and hired me to do photos. And so I was going there, working for him. I mean, it was exciting for me because I was getting to work as a photographer. And I just met more people there and just always found it really stimulating and an interesting place. And people kind of know the world there. So, I kept going back there to do this work. 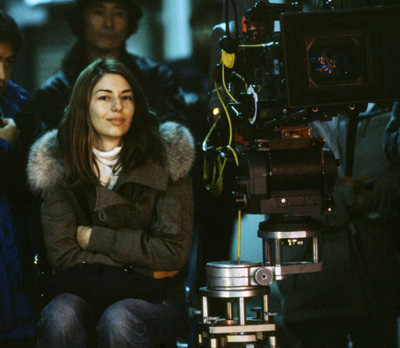 When was this? Kind of over the past eight years from my early to mid-20s. I kind of go there once a year for the past eight years and as a little kid I remember going to Japan with my parents. They were interested in Japan and took us to see the temples and all that kind of stuff. So, that was more of the traditional side.

Music has been important to both of your films. At what stage do you think about music? I was working early on with Brian Reitzell, my friend who's the music supervisor, who helped me pick the source music for Virgin Suicides. And I asked him to make compilation CDs when I was working on the script just to kind of get into the whole mood and help me with the writing. And we talked about that kind of dreamy feeling of Tokyo we wanted to have.

Did the comedy elements come out of Billy Murray improvising or was it something you wrote, that part of this would be a slap-sticky comedy? You know, when I was writing it, there were certain situations that I thought were funny, just when I was there, like just misunderstandings. And so, I guess that was what I found amusing or funny. And then definitely Bill Murray added a lot to that one. Like the photo shoot, that was all improvised.

The exercise machine? Yeah, yeah. Actually that was his idea. When I was writing the script I was seeing what kinds of things he'd be doing in the middle of the night, you know, ask him if he had any ideas so we could kind of collaborate. And he said, Well what about the exercise machine? And then I wrote the scene where he can't understand how to work it. But that was kind of him going off. One of the things I love is how funny he is, and I let him do his thing in that setting.

Did you write this with him in mind? I did. Yeah, I was definitely picturing him, and I definitely wrote it for him and couldn't really think of anyone else.

Is Scarlett's character autobiographical? No. I mean, definitely I feel close to that character, and there are parts of me in that character. But then there's also a friend of mine and characters from stories, like Franny and Zoey. I always liked the preppy girl having a breakdown. But there are definitely sides of me that when I was in Tokyo and I was younger; there's that thing of being jet lagged in the middle of the night. Everybody knows what they're doing, and who am I? You know the kind of questions that you ask at that age. So, I wanted to put that feeling into it. And she's kind of a smart-ass in a way, and I am. There are definitely parts of me in her, but it's not totally.

Are you afraid everyone will ask you if this is autobiographical? I think anything you do, you put yourself in it. I mean not literally, but when you put yourself into, when it comes time to put it out, it is a little scary, like, Oh here I am showing my personal side. But it's not my personal life. It's not autobiographical, so in that way I can kind of be in the different characters, and it's not directly me. I wasn't really thinking about having to show it when I was making it. So it was weird to then like show it. It's like, Oh my God. Here are all these things.

Is this movie a romance? Well, I think it's romantic in feeling. It's not really a romance. It's, I guess, more of a friendship. But I like those kind of relationships that are sort of in between and that you do have these memorable relations with people that don't ever become a real thing.

How would you compare the experience of writing an original versus an adaptation? It was scarier for me writing an original screenplay. To me, adapting a book, you always have something to look to when you get stuck. And this one, when you don't know what to do, you don't have anything to refer to, so it was a little bit more daunting. But I wanted to try to do it.